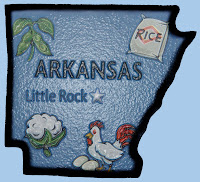 If you can believe it, we actually woke before the sun this morning. You know that feeling you get sometimes during the winter months, where you wake up for work to find its still pitch black out and for one moment you worry you set your alarm clock wrong…Unfortunately it really was 6am and, yes, we had to get up. The only good thing about beating the sun’s rising was that we got to enjoy the colorful illumination when it finally happened.

The reason for the early start was that today marked the final ‘driving day’ of trip and we had an eight hour drive to make our way through. As spending such a long time in the car gets boring we threw in a lovely scenic drive to entertain us. Well, it is likely to be our last mountainous terrain for the near future – not too many mountains in Minnesota! The ride through the Ouachita National Forest began ominously with grey skies. Where’d that damn sun go this time??

It felt like quite a while since we’d been on such windy roads (although they weren’t as hair-raising as some we’ve experienced). The curves around the fall-laced trees often made for a better view than the expansive landscapes…which is weird because almost as soon as we realized this the weather gods must’ve agreed too and sent in some challenging fog to hamper our panoramic shots.

As we approached the state line I was nervous that the fog would make it impossible to spot the ‘Welcome To’ signs. Luckily they were both in the same spot, so it wasn’t hard to get the missing Oklahoma sign and a new one – state number 46: Arkansas. It was a shame our time on the Talimena Scenic drive was ruined by fog, much like it was on the Pacific Coastal Highway in California. Perhaps we just aren’t privileged enough to see these particular skylines…Rats!

Giving up on the blocked scenery, we made our time in Arkansas briefer than our brief time in Oklahoma and fought our way through the fog to make it clear across the state. This journey was only noticeable for the bad drivers (just ask the semi-driver who got stuck!) and a tasty Cracker Barrel lunch. Eventually we reached state number 47: Tennessee and the city of Elvis: Memphis. Tired from our full day in the car we chose to have a very relaxing evening in the hotel. Zzzzzzzz.