Day 67 – Saw The Ghost Of Elvis On Union Avenue

The rain finally caught up with us again today, but we really can’t complain too much as we’ve had fantastic weather for the majority of this trip. It did make it difficult to do anything outside though so it’s lucky that most of today was spent indoors…And what an indoors! Memphis is home to the 2nd most visited private residence in all of America. Why? Because it’s where The King lived – Graceland.

Elvis Presley bought Graceland in 1957 and lived there until his death in 1977. Knowing his unique sense of style it seemed strange that he chose to stay for twenty years in such a reserved, classy looking mansion, but the outside does little to prepare you for the completely contrasted decorating style within. It’s where gaud found a place to reside.

Although you can’t tour the upper level, the main floor and the basement definitely give you a sense of who Elvis was and the kind of lifestyle he led. The basement was a particularly cool, colorful place and showed a lot of his quirky personality. I think Joe was enthralled by the ever present use of shag carpeting, even if it was mostly on the walls. I can assure you that no matter how hard he pushes for us to recreate the look, the house we buy will not follow this dated trend – carpets are for floors people, never forget that!

The last room to see in the house is the Jungle Room, an informal living room that got its name not from Elvis, but from visitors…probably because of all the green and, oh yeah, the monkeys! Just outside the back of the house is his father’s office and the vast backyard. You get to see some cute home movies along the way of Elvis and his family playing about in the garden and it reminds you that this really was where he lived. It’s easy to forget that while walking around the grounds--as if it was just a museum.

Also on the estate is a building called the Trophy Room, which houses a lot of Elvis’s gold records and awards plus a bunch of amazing memorabilia. In fact the whole Graceland complex has many different museums and special exhibits with almost everything from his life. This place is an Elvis fans mecca!

Passing by the surprisingly small swimming pool we came to the Racquetball Court. The original entry room is still intact, but the court itself has been turned into a room to house even more gold records and memorabilia. Suffice to say, this guys sold a lot of records over the years, so no wonder they don’t have enough wall space for it all!!

The final part of the estate tour is Elvis’s grave. My mother (a huge Elvis fan) was always crushed by the fact that, back when she was about my age, he died on her birthday…Not really the way you want to celebrate. Seeing his grave did make me curious about one mystery though. I’d often noticed his middle name spelt Aron, but on the headstone it was spelt Aaron. Turns out Elvis personally preferred the latter and even though his parents had given him the name at birth, his father honored his son’s wishes for the more traditional spelling upon his death.

As if seeing where the King lived wasn’t enough, you also get to see the big toys he liked to spend his cash on. There’s an Automobile museum featuring my favourite of his iconic items – the pink caddy – and the car he drove on the day he died. But if cars aren’t your thing, you can always think bigger and take a look inside his personal plane. The full sized airplane, named after his daughter Lisa Marie, was kitted out to be his Graceland in the sky, but even a plane with all the comforts of home wouldn’t make me want to fly...Not even one with it’s own bed.

By now you’d expect us to be all Elvis’d out, but there was yet another exhibit to take in. The 68’ Special. A tiny little exhibit/gift shop, it had a couple of interesting items from his ‘comeback’ TV special including his famous black leather get-up. If Graceland makes you realize anything at all it’s that in today’s culture of superficial fame there will never be someone to emulate such genuine superstardom.

As we’d now seen everything from Elvis’ life as a big star right up until his death, it seemed like a good time to go where it all began with a trip to the legendary Sun Studios. This place is literally where Rock and Roll was born. When it first opened it was called Memphis Recording Service, but owner Sam Phillips had bigger dreams and didn’t just want to record for people, he wanted to run a label…so that’s exactly what he did.

When Elvis first recorded there he made the excuse that he wanted to record a song as a present for his mother, but turns out this was just a little white lie he told to get in the door, really he was trying to get discovered. Eventually he was a regular visitor there with the likes of Johnny Cash, Jerry Lee Lewis and Carl Perkins – they even jammed together once, getting the nickname the ‘Million Dollar Quartet’. Can you imagine being a fly on that wall?

And what better way to end our day in Memphis than with a trip to Tops Bar-B-Q, an old hangout of Elvis that happened to be a couple of blocks from our hotel on Union Ave. It may not look like much, but it was some good southern cooking and just what we needed to fill our hungry bellies. You might say, it was a dinner fit for a king? 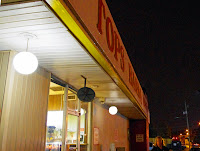