Our time in San Francisco came to an end this morning as we packed our bags and rejoined the craziest roads we’ve ever had to deal with. Luckily it didn’t take us long to get out of the city; despite our GPS trying to make us drive into the bay on a bridge that didn’t exist!

Before heading South we made a quick photo stop outside Pixar because, well, we were in the neighborhood! My work at Disney meant I was constantly surrounded by all things Pixar, but being stood there today made me realize I’m still a big nerd at heart and will always be star-struck! We made our time there short as Joe was having quite the bladder issue; you’ve never seen such a ridiculous search for a restroom. Two gas stations, a Starbucks and a Jack in the box later, Joe was refreshed and we were on our way! 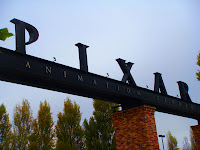 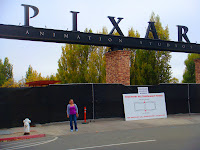 When planning this trip there were a few must-sees on our to-do list because over the years you hear about places and in your head they take on this bigger-than-life reputation to the point where you just have to go there no matter what. Usually they don’t live up to your expectation and sadly today was one of those times.
Back when I was in my late teens I heard a bizarre story about a woman who kept building on her mansion non-stop for 38 years due to her belief it would appease the spirits of all the people killed by her husbands family creation - the Winchester rifle. I was so fascinated by this building, that had stairs built into the ceiling, windows in the floors and doors opening to blank walls, that I gave this visit top priority.
Unfortunately the reality was it was just a ridiculously large, decrepit house that charges $28 a tour and doesn’t even let you take photos inside. Big letdown.

The best thing about the place was it had an arcade with old 80’s/90’s video games! We couldn’t resist giving the old Simpsons game a try and then some Super Mario Bros. It’s funny how you never seemed to get much past level 1 as a kid, but we did pretty well before becoming kinda bored…Ah, being a grown up… The other cool thing we found was across the street, a cinema with a retro marquee and the movie theatre itself was split between 3 separate dome shaped buildings!

We wished we had time to see a movie there, but we had to hit the Pacific Coast Highway instead. The road winds its way along the Californian coast and is supposed to be one of the most scenic drives on the planet…except our journey through Big Sur and beyond was a little, um, foggy! This wasn’t the California I was promised!!

The fog obviously made a twisty, cliff-filled journey interesting (I think Joe has a few more grey hairs now), but ultimately we had come to see the ocean, so…..It made for some pretty photos, though at times it looked like there was a wall of clouds over the sea. Also the sun would break through every now and again as we passed some cool sights along the way, like some Elephant Seals and Hearst Castle. Our main goal was to get all the way to Morro Rock.

Morro Rock is a huge hill of a rock that can be seen for miles around…Can you spot it in the photo? I’ll give you a clue, it’s not the rock the plaque is attached to…Yep, fog made this visit a bit pointless as we couldn’t even see the damn thing, in fact we could barely make out all the seagulls.

Cutting our losses we made the way to our hotel for the night; one of our rare non-chain stops. The Madonna Inn; famous for its kookily decorated rooms. Each one has a different theme; ours is Mountain Cabin. Yodel-lay-he-he…