Day 28 – Watch Out For That Big Hole In The Ground 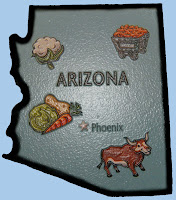 Due to last nights alcohol-related activities we ended up back down on the casino floor until almost 2am…oops…Suffice to say we overslept this morning and didn’t make it on the road until 11am. Seems we were leaving at the right time as even late last night the influx of weekend visitors made a packed playground overcrowded. We were sad to leave Vegas, but our bank account probably breathed a sigh of relief.
Driving a little way out of town we made a quick stop at the Hoover Dam. The last time I did the Vegas-Grand Canyon trek happened to be just after 9/11, so the dam was closed to the public and I never got to see it. This time around there was nothing stopping us, not even the slow moving traffic for miles approaching it. The traffic did have one bonus though, we were able to capture the ‘Welcome to Nevada’ sign as we left the state; it was too dark when we arrived there Monday. 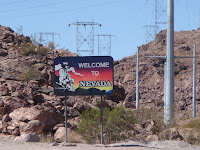 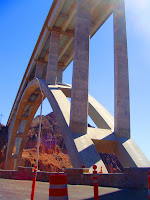 Originally we had planned to take a tour of the Hoover Dam, you know, learn all about hydroelectricity and whatnot, but there were three factors involved in our decision to just stay topside.
One, we were running so far behind schedule that if we stayed for a tour the following four hour drive to the Grand Canyon may have gotten us there after sunset making it difficult to, er, see the canyon!
Two, although we’re trying not to let the expensive car repairs dampen the trip it is making us re-evaluate unnecessary costs, which brings us to the final reason:
Three, best summarised in the words of Sideshow Bob upon seeing a similar dam…
‘Just the thought of all that raw, surging power makes me wonder why the hell I should care!’

Yep, we suddenly realized neither of us were particularly interested in how the dam worked, it was just enough to know that it did work. So, normally I’d give you some fun facts we learned at the place we visited--but today I have none other than that I was disappointed as I always thought the Hoover Dam had rushing water falling down it ala ‘The Fugitive’. Still, looking down at all that concrete was nothing to sniff at I suppose…

Continuing on into state number twelve: Arizona, and after a long afternoon of driving, we finally arrived at the Grand Canyon. It creeps up on you outta nowhere in the middle of the desert. The first time you see it, it takes your breath away. It’s something that makes you realize this world is bigger than we ever really stop to appreciate. It feels like a painted canvas brought to life right in front of your eyes. It’s just ‘show-stopping beauty’ in a way you don’t know how to process…But what’s really nice is the second time you see the Grand Canyon…

There’s something to be said for the reminder that it’s still there! That no matter what has happened in the years since you saw it last - how much has changed, all you’ve been through - that big, giant hole in the ground is still there being awe-inspiring.

It’s good to have those moments where you get to remember that the world isn’t always about your own drama because it’s got some of its own. It may have taken millions of years to make it, but it’s a hell of a lot more impressive than anything we could ever come up with.

With the sun setting on the canyon and another day on the road down, we tried to leave our baggage in the trunk where it belongs and appreciate how lucky we are to get to see amazing sights like this again and again.