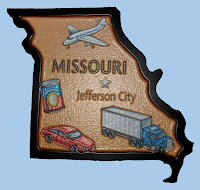 We all love stories, songs, movies; anything that captures our imaginations and takes us to other worlds. Despite the excitement of fiction though, there’s something to be said for true legends, featuring enigmatic characters that grow in our consciousness until they become household names. In this day and age obsessed with ‘celebrity’, we forget that long ago - before the Internet, TV or even radio existed - you really had to be ‘someone’ to have everybody know your name.

Today we arrived in state number 16 - Missouri - home to all things Jesse James; certainly a name everybody knows.
We started by visiting the Jesse James Farm, where he was born and originally buried. The house has been restored faithfully to when the James’ family lived there, with a part at the back still in its original condition.

A lot had happened in that house, including in 1875, when members of the Pinkerton Detective Agency threw a bomb through the window thinking Jesse & his brother, Frank, were inside. They weren’t, and the bomb killed Jesse’s 9 year old half-brother and severed his mother’s arm. Standing in the space was eerie, the history somehow felt more real than most of the places we’d visited on this trip.

Jesse was originally buried at the house and his mother’s bed was moved to face the grave so she could protect it at all times from grave robbers, but when she died it was decided that his body be moved to nearby Mt. Olivet cemetery. As it was only down the road we decided to make the detour. The plot has the graves of most of his immediate family. Including his mother and step-father, his half-brother, Archie Samuel, and his wife, Zerelda – who also happened to be his first cousin…

We made our way to the house Jesse was murdered in on the hilliest up and down road I’ve ever seen and it gave us time to reflect on what brought us to add these stops to our trip. It wasn’t until we saw the movie ‘The Assassination of Jesse James by the Coward Robert Ford’ a couple of years ago that we became interested in the legend of Jesse James. It seemed ridiculous somehow, but the truth is Jesse James, the world’s most famous outlaw, did nothing more than murder in cold blood, steal money and hide from the law, yet he became a hero to the American people! Something may be a bit backward there, no? (Joe says: ‘But Brits looked up to Robin Hood in the same way, so…and at least we can prove James was a real man').

This realization was drove home when we stood in his house looking at the hole in the wall where the bullet that killed him hit. Robert Ford, finally catching his ‘friend’ Jesse without his guns on, shot him in the back of his head as he cleaned a dusty picture on the wall. The main theories were that he had wanted to claim the $10,000 reward or possibly that he was looking for the same kind of fame and glory Jesse himself had garnered. He got neither, despite being the man who brought justice to a notorious criminal. It seems even back in the 1880’s fame forgives all, with the outlaw being loved and the person that stopped him hated for it.

Finding an antiques mall across the street we had a browse and Joe again tried to convince me he needs a cowboy hat. Still not happening. He did buy an old 45. vinyl called ‘Songs of London’. Seems someone’s missing the UK to the tune of 74 cents!

Also in St. Joseph is the Pony Express museum which is dedicated to telling the story of how the post got delivered from the mid-west to the west coast before the trains or telegrams reached that far. I don’t know how this found its way onto our schedule, perhaps it sounded more interesting when planning than in person. The best part was the hookey, locally produced movie based on the history of the Pony Express that they make you watch -- we got a kick out of that!

On the way to our hotel we clipped the corner of state number 18, Iowa, but we didn’t dwell long as we’ll be there tomorrow, so we crossed over into Nebraska (state number 19) for the night. Nebraska is only giving us Zzzzzzz on this trip.

You've been reading http://www.fiftyfirststates.com/
Posted by Ani K at 23:55