Day 35 – We Heard It Through The Grapevine 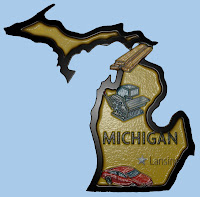 The early start today paid off as we were done with our oil change and wheel rotation by 10am. A less successful endeavour was a trip to Walmart. While in Nebraska we bought two CD’s to help us through the long drives. The Flight of the Concords album went over well, but unfortunately we found out the Eminem album was a watered-down version with all the swears cut out. No parental advisory sticker needed on this trip, so I went to see if the Illinois Walmart would refund our 12 bucks. No dice. Turns out due to copyright laws they will only exchange CD’s for an identical item. What an awesome waste of money; it’s not that I need the profanity per se, but based on all the distractingly irritating spots of dead air we were hearing, this album must have had a lot.

Putting this retail annoyance behind us, our drive this morning took us by Chicago. We do love visiting there, but as it’s a place we’ve been so many times before, we decided not to stop. Although I did get to see the White Sox stadium for the first time…it’s not as good looking as the Cub’s Wrigley Field. Between there and state number 21 - Indiana - all we found were $8 worth of tolls and two different semi-trucks trying to push us off the road…Scary!

We’ll be heading back to Indiana on the way home, so we breezed by straight into state number 22; Michigan. Both these states weren’t particularly attractive to look at, very industrial, but this is very rooted in both their cultures. Our main destination was of course Detroit, the Motor City and home of Motown.

The Motown Museum – AKA Hitsville USA – is the birthplace of Motown. And despite being on the road for 7 hours today we still managed to get there just in time for the final tour of the day. The museum is in a very rundown neighborhood and all the old, architecturally beautiful buildings have become windowless and decrepit. I’d heard Detroit was like this, but seeing it firsthand was very depressing.

The history made at Hitsville USA is a true success story in the music world. In 1959, after bankrupting himself on an ill-advised jazz record store, Berry Gordy borrowed $800 from his sceptical family to set up a record label. Just a short couple of years later he’d turned it into the multi-million dollar company, Motown Records, by having a talent for knowing how to write a great song & pick the right singer for it.
It was quite an achievement, especially considering he had to overcome the widespread racism of the 50’s & 60’s. One of the clever ways he got around white radio stations not wanting to play music made by black people was by using artwork on the earlier record sleeves instead of the artists photo. That way the radio stations didn’t know what the singer looked like, just that they were hearing a great song. Eventually the stations stopped caring about the artist’s skin color because the music was topping the charts and making bucket loads of money, so the photos went back on the record sleeves!

The tour itself was very interactive…not something everyone will appreciate. I really didn’t enjoy being encouraged to sing in front of our group and therefore disappointed our tour-guide with the comment ‘Sorry, I don’t sing, it’s better for everyone that way!’. Joe on the other hand enjoyed his solo centre stage version of ‘Heard It Through The Grapevine’…There was also a funny group from the Netherlands; when one was asked what brought them to Detroit he deadpanned ‘A plane’, while another, when asked to participate looked nervous until the tour guide said not to worry she just needed him to stand there – his response? ‘That’s my speciality’…who knew the Dutch were so funny???

On the way to the hotel we found a severe lack of food and ended up at a Big Boy restaurant that was in walking distance. I was surprised to realize I couldn’t remember the last time I’d eaten fries on this trip and strangely didn’t enjoy coming back to them as much as I thought I would. I think Cracker Barrel’s home cooking style may have spoiled junk food for us!