Day 51 – The Difficulties Of Having A Gettysburg Address

The Phillies lost their first game in the playoffs last night, so we left behind a sober city this morning. We tipped our hat to the ballpark as we passed it by and wished them better luck for tonight (not really, Joe wants the Giants to win, but at this point I’ll support any team to win as long as it’s not the Yankees!). We exited Pennsylvania, hopped over two states, and ended up back in Pennsylvania as if we’d never left.
Sorry Delaware and Maryland (states 33 and 34 respectively), we don’t have time to give you our full attention on this trip, but during our drive through I did read a bumper-sticker that said ‘Not all who wander are lost’. It made me smile, so I thank you for that!

Our stop today was the most famous battlefield in the Civil War – Gettysburg. It’s starting to feel like I’ve been taking a lesson in American history on this trip and, as well as being well versed in the birth of this nation, I am now also an expert on the reasons behind the civil war! I had considered the visit to Gettysburg to be something I’d graciously wait out while Joe enjoyed the stories of war, but it ended up being extremely interesting and surprisingly moving. 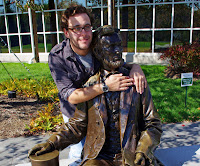 Most people start their time there at the visitor’s center, which begins with a short film (narrated by the best voice in Hollywood: Morgan Freeman!) about how things kicked off. The second part moves you into something known as a ‘cyclorama’; a circular room showcasing a huge painting. Apparently these were a common form of entertainment before movies swept the world -- but are pretty rare these days. The work of art here is astounding; especially considering it was originally painted in 1883.

The final part of the visitor’s center is the museum, which takes you through the story of the war and has artifacts on display. Overall I was impressed by the whole complex; its set-up really helped draw in even me – a person who previously had little interest in this part of history. I was shocked to learn Abraham Lincoln was not a particularly loved president during his time in office and it was only in the years that followed that he became so revered by Americans…Isn’t that always the way?

The rest of the time in Gettysburg is a driving tour. We made our way to the Soldier’s National Cemetery; the spot where Lincoln delivered the Gettysburg Address. The speech was actually made nearly five months after the battle, when the cemetery was being dedicated; he wasn’t even the main speaker that day. Despite it now being one of the most iconic speeches ever made, Lincoln himself was humble in how he thought his words would stand over time, stating in the address: ‘The world will little note, nor long remember what we say here’…He would not live long enough to know how wrong he was on that part, or how right he was on the rest.

Walking around the cemetery, and all the monuments dedicated to the lives lost there, we discussed how moving a place it was. I felt that, if anything, I was more affected by our time there than Joe, but he made a very valid point. America was a country founded on immigrants, having been born there Joe had an entitlement to be an American – I on the other hand had more in common with the early settlers, having left behind my own country in search of a new life. Could it be the values of liberty and freedom are now lost on modern America? The little guy pulling his red wagon full of stars and stripes gave me hope that this isn’t true!

Getting back on the auto tour we drove around the fields that now show little sign of the many deaths that occurred other than being littered with statues. The statues are placed to honor each of the regiments that fought there and help stand as a reminder to the event that took place there rather than just looking out on empty battlefields.

Leaving the ghosts of US history behind us for the day, we drove across the rest of Pennsylvania, passing our 10,000th mile since buying our car 64 days ago. This is a crazy number considering back in London it took me a year to do that many miles… To celebrate this huge marker we moved back into mountainous terrain (we’ve been getting used to flat ground recently), so it made a nice change to see some distance again!

Now it’s back to the hotel to watch more of the baseball post-season. And after learning all day how ‘The North’ won – I can rest easy tonight knowing that New York aren’t playing. One Yankee win in a day is more than enough.