Day 61 – A Pair Of Normal Activities 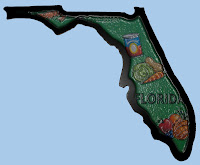 Today I wondered if perhaps we should have just spent our 74 days of travel here in Pensacola. It’s one of the most relaxing places we’ve ever been and being on this little slip of a seafront out-of-season makes it feel like we have our own secret piece of paradise. We took advantage of that by spending most of the morning in the ocean.

There was a red flag alert warning of strong currents, but seeing others in the water we decided it would be ok if we stayed close to shore. Despite loving the ocean, I’ve never been a fan of seawater or sand. Sand has its obvious annoyances, but saltwater I’m not a fan of due to swallowing a bunch when I was younger! I got over these issues today though as we couldn’t come to Florida without swimming in the sea.

Joe has always been a natural ocean-dweller (I think it’s the big kid in him) and he took to wave jumping like a duck to…well, water! I have to admit, it did feel amazing getting batted about by the crazy waves and we even contemplated whether a permanent move here was on the cards! The sand is like fine sugar and the water a clear turquoise, it’s just beautiful. Sadly there are some downsides we may not adapt to, namely the fact that anything with glass fogs up due to the humidity…oh and hurricane season!

The time came to leave the sea when I got stung by what we believe was a detached jellyfish tentacle. It felt mildly tingly for awhile, but wasn’t that bad, just looked like I’d ran into some stinging needles! If you’ve been reading this from the beginning and are starting to wonder how comes all these random things (freaky bug bites, hives, jellyfish) keep happening just to me and not Joe, well, I’d like an explanation on that too!! We figured it would be safer to keep on being waterbabies in the hotel pool instead. It didn’t have any waves to jump, but it was heated to a perfect tropical temp.

After we were pruned to the point where we could be pruned no more, we dried off and went to catch a movie. Our pick was the supposedly scary ‘Paranormal Activity 2’. On the plus side: we liked the way it fit in with the original story-wise, but on the downside: it used the same boring techniques too. Watching empty rooms on the screen, while waiting for something to happen just makes you feel cheated when nothing particularly impressive does. The movie wasn’t nearly as entertaining as another beautiful Pensacola sunset…Damn, it’s going to be tough to move on tomorrow!!

You've been reading http://www.fiftyfirststates.com/
Posted by Ani K at 21:14