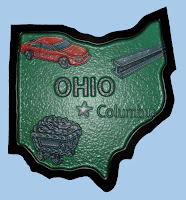 Today marked a very important milestone for us. Day 37 is the halfway point of this roadtrip! Ironically it also coincided with our arrival in the midway state (25 of 50), so I guess that means it’s the middle of the road! We started this momentous day in Cleveland. I’ve heard lots of things about this town, none of them good, but I thought it seemed like a cool place with a lot going on. They certainly love their sports, the Indians stadium looked pretty decent.

Our attraction today was the Rock and Roll Hall of Fame. Which is - by their own boasting - the house that rock built. As well as their permanent collection, going on during 2010 is something that excited me no end: A Bruce Springsteen exhibition. If you know me well, you’ll know I love the Boss (I thank my mother for this obsession!). The exhibit followed his career from his start as a teenager right up to date. This guy was certainly born to run… (huh, huh, see what I did there??)

The rest of the museum has some really amazing stuff, as you can see from Johnny Cash’s tour bus that sits outside. They have 4000 artefacts on display in the museum (although they hold up to 25,000 in storage) and some of it would blow the socks off anyone that loves music…I’d give anything to show you some of that stuff, but the meanies there don’t allow you to take photos, so here’s Joe having lunch -- but if it helps your disappointment in the lack of photos, just know during this lunch we shared a peanut butter and jelly sandwich that was probably the best sandwich I’d ever eaten…I’m gonna have dreams about that thing!!
Before we left though, we managed to take some snaps in the lobby, it wasn’t the best they had, but it’s still better than nothing I suppose. Here you’ll see a prop belonging to Pink Floyd, Bruce Springsteen’s first car, the Phish hotdog concert prop, Weezer’s concert light symbol and the awning from famed rock club CBGB’s (Inside was much better - we saw such things as John Lennon’s Sgt. Pepper suit, Springsteen’s Born To Run album outfit and some amazing Rolling Stones kit…).

It seems it was a busy day in Cleveland as there was a Browns NFL game going on in the stadium right next to the museum. Thanks to this event the parking downtown cost $25. Holy crap! Still, as the car was already parked, we took the opportunity to walk up the street and find the city’s famous giant rubber stamp. Yep, it sure was giant.

Leaving Ohio behind, we took a very rainy cruise through state number 24 (Pennsylvania, we’ll be back there when we hit the east coast side) and into the earlier mentioned midway state; state number 25: New York. A quick visit to Target there prompted us to purchase hats for tomorrows activities…Will we ever see the sun again on this trip?