Day 63 – That Voodoo That You Do So Well 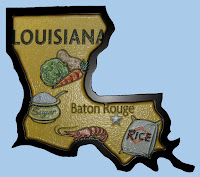 What a difference a day makes. Yesterday we had become apprehensive about our visit to New Orleans, but awaking early this morning we started walking around the peacefully quiet, empty streets. This city has a look all its own, with its colorful house-fronts and decorative balconies. The streets are all skinny one ways, mostly filled with trucks restocking the bars and restaurants with food and, more importantly, beer.

As we took a stroll up Royal Street the people started to make an appearance. It was nothing like the NOLA I’d heard about though--this street was full of upscale antique stores and creative art galleries--not a single drunk college student to be seen. Jazz musicians showed up to add a constant soundtrack to our window shopping and Joe was even inspired to buy one of their CD’s – Never let it be said that this trip hasn’t broadened our horizons!

Getting into the spirit of things we took a trip to the Voodoo Museum to learn about the history of the Creole religion. That’s right, Voodoo is not witchcraft (which is a common misconception), it is actually a religion. Marie Laveau was generally considered the NOLA Voodoo queen. On the surface she was just a local hairdresser, but she was revered and feared by most locals because it was said she had special powers that allowed her to be all-knowing. In fact how she obtained her knowledge was in part due to being a hairdresser (us women love to gossip!) and also her hold over all the servants that worked in her wealthy clients homes; they were her spies!

Staying in the spooky mind-frame we took a tour of the Saint Louis cemetery. The cemetery has been in use since 1789 and although being only the size of a city block it is home to around 100,000 dead bodies. This is because the tombs can never be filled due to the heat eventually leaving nothing but ash; so a family can own the same tomb until the end of time. The most fascinated thing we learned was that (despite the longstanding myth) the reason the graves in New Orleans are above ground and not under isn’t because the town is below sea-level, but because that’s how all Spanish colonies ‘bury’ their dead.

Because it’s either down to the families or the church to take care of the tombs upkeep, some are sparkling and some are falling apart. There are a number of interesting graves there, including that of Marie Laveau. Also the cult movie Easy Rider filmed there back in the day. Strangely, inbetween all that history, there’s a new vault that was only finished earlier this year: it belongs to Nicholas Cage! Yep, someday you’ll be able to ‘visit’ H.I. McDunnough there. It’s the huge big pyramid tomb inscribed with the latin “Omnia ab uno”, meaning “All from one”.

Walking back to the French Quarter we passed Louis Armstrong park; where Marie Laveau used to do her ancestral rituals for everyone to see and then we passed by her house…only it apparently isn’t really her house as the city planners accidentally pulled the original down in the 1906. It’s likely someone made a booboo there!

Finally we finished out our daytrip by taking in the sights of New Orleans famed Bourbon Street. The home of Mardi Gras generally seems to celebrate year round, but being Halloween weekend the street had good reason to be full of tourists. It may have only been 3.30pm, but things were already in full swing.

The party atmosphere wasn’t as appealing as you might imagine, especially the rotting smell that filled the street. There’s no end to the amount of bars you can choose to enjoy your ‘huge ass beer’ in if that’s what you go to NOLA for, but unfortunately after six hours of being on our feet all we wanted was some food to fill our rumbling stomachs, some coffee to calm our weary heads and some comfy chairs to rest our aching feet.